Design Earth: Behind the Solar Shield

Invited to the 17th Venice Architecture Biennale to participate in the United States Pavilion exhibition, Design Earth exhibits The Planet after Geoengineering, a series of drawings, animated films and a graphic novel depicting different life scenarios on Earth according to the drifts of climate technologies currently under study. “The term ‘geoengineering’ refers to technologies that neutralize the effects of anthropogenic climate change by deliberately intervening on earth systems. Climate scientists and policymakers are still deeply divided over what forms of geoengineering to pursue.”

From the underground depths to outer space, the architects make these controversies visible in five chapters, each drawing the Earth according to these climatic researches: ‘Petrified carbon’, ‘Arctic albedo’, ‘Heavenly river’, ‘Sulfur storm’ and ‘Cloud of dust’. This final chapter chronicles the effects of the ‘solar shield’, an emergency device imagined by the University of Arizona in 2006 to cool the Earth and made up of 16,000 billion 60-cm-diameter transparent screens. Driven by their mastery of storytelling and drawing, the architects of Design Earth explain science that we would hope is fiction.

A shield that protects the atmosphere from two percent of solar radiation is promised to offset the warming effects of greenhouse gas emissions.
A giant space shade orbits in equilibrium at a Lagrange Point between Earth and the Sun.
The shield is an artificial constellation of dust that is sourced from near-Earth asteroid mines.

The dust-scape above is luminescent in the night sky slightly deflecting and scattering light.
Do you remember the falling stars that traced through the heavens?

The compacted junkyard is polished into a space-based solar power plant that beams energy to Earth.
The helio-beam is also a Sun gun that concentrates enough heat onto a point to make an ocean boil or a city burn.
The accumulating dust and smoke dull the starry sky.
The Respirator Goddess blows the breath of life into the planet.

I can’t breathe.
All wars on life begin by attacking the respiratory tract.
Living species choke with the carbon damage that humans wreak on the Earth’s lungs.
The terror of geoengineering is to be forced to live intimately with the death of the atmosphere contemplating suffocation as a real possibility.

Dust plumes close in an artificial eclipse.
Much of humanity is caught in the stranglehold of sulfur and dust storms.
Swirling whorls of dust sweep through barren lands.
Dustomonia; it howls and groans, it squeals and moans.
Every blow produces more pain.
The Earth deserves palliative care.
Welcome to the climate emergency!

January 2021: The Biden administration has at last replaced that of Donald Trump. The question asked ...More about 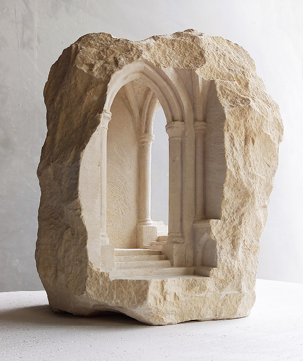 "Inspired by the formal language and philosophy of architecture" Matthew Simmonds' work explores "themes of positive ...More about

Vestiges Report, a Selection of Projects

The other side of the mirror Bernard Desmoulin + Pierre-Antoine Gatier, Médiathèque Aqua-libris, Saint-Maixent-l’École, France, 2016. ...More about