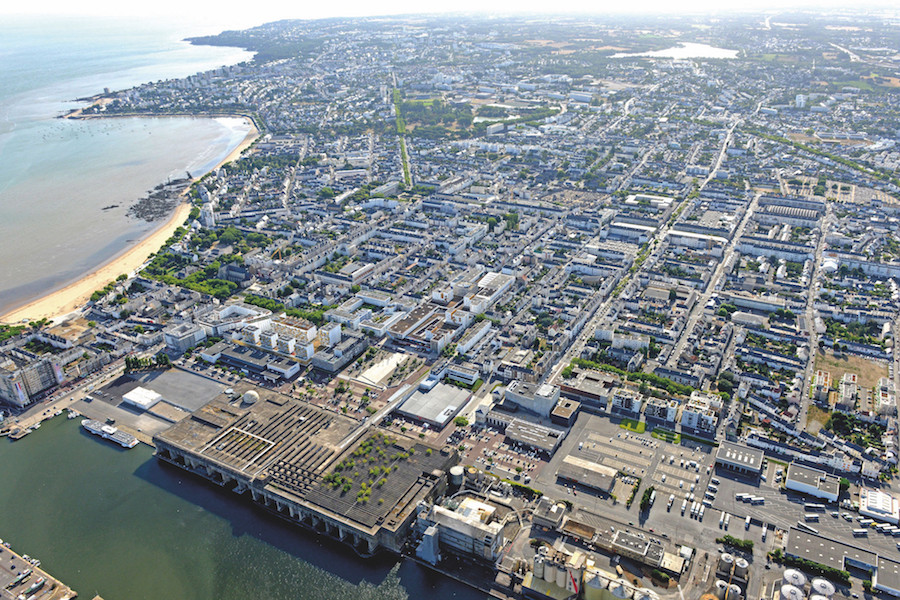 The paradoxical docks of Saint-Nazaire

On France’s West coast, Saint-Nazaire, a city of 70,000, has plenty of urban space to develop as a result of the total destruction of the city’s seafront during the Second World War. Saint-Nazaire was home to one of the largest submarine bases on the Atlantic coast, covering nearly 4 hectares with its 300 metres long and 130 metres wide, which has now become part of the city’s heritage.

In 1982, Saint-Nazaire’s prognosis was not very encouraging. There was no real city centre,shops were moving to the outskirts, it had undeveloped public spaces, a harbour in a state of neglect and a forgotten seafront. In an almost Soviet fashion, there was no need for beauty in the city of Saint-Nazaire as long as it worked, to the point of feeling a little ostalgie in places. In short, everything had to be started from scratch! And, in a way, this is what happened, from the Centre République by Claude Vasconi (1991), which revitalized the city centre, emphasizing the impressive Avenue de la République in the centre, to the Ruban bleu shopping centre, designed by Bernard Reichen (2008) connecting the pedestrian area of the Centre République to the submarin base and the harbour. Noël Le Maresquier, named chief architect of the reconstruction in 1943, under Pétain (and the city’s consultant architect until 1978), took advantage of this clean sweep to reverse the general direction of the city, which was previously oriented towards its harbour. With the help of political stability, all the projects developed by the city in the last 40 years, since the adoption of the Projet Global de Développement (global development project) in 1989, can be read in the light of a patient, slow but obstinate resolve to re-establish the maritime foundations of the city, with the submarine base as its focal point.

“Infra-Architecture”
As former mayor Joël-Guy Batteux puts it, he received, in his willingly “instinctive” early days, training in architectural and urban development from the former director of the city services, who was a qualified architect. In many respects, “he inspired my passion”. At the time, “we would gladly refer to Saint-Nazaire, but never the city of Saint-Nazaire. The city was not thought of as a city.” It would become the role of architects and urban planners to help the city “work on its representation”.

On 22 April 2007, the impressive Alvéole 14 (Pen 14) of the old submarine base was inaugurated, converted by Finn Geipel and Giulia Andi (LIN office). It houses a rock concert venue called the VIP, and “a site for emerging creative forms”, the Life, a large exhibition hall that has so far found it difficult to meet its own ambitious goals. A decade after the “Ville-Port 1” consultation, won in 1995 by Catalan urban planner Manuel de Solà-Morales, based on the idea of opening up and integrating the submarine base, this inauguration marked the revival of the project and the beginning of a very happy episode in the multi-twist saga of the relationship the city has had with its harbour since the beginning. The headline in Le Monde newspaper at the time read as follows, repeating Batteux’s words: “The ‘dreadful’ port of Saint-Nazaire has become a ‘leading district’”.

Following in the wake of Solà-Morales, Geipel worked with the essence of the place rather than creating an architectural statement. His representation is simple and minimalist, with just a concrete floor covering a dock that still contains water, trays and steel beams for the false ceiling and technical grid, an overhead crane for the scenography, a monumental folding metal door that (occasionally) opens onto the port basin, a reconstructed indoor street lit with a forest of aluminium rods ending in white diodes, and then just a dome positioned on the roof. In a way, the Life is a sort of “infra-architecture” in response to the solid appearance of the infrastructure and revealing the cryptic qualities of the site.

Now, over 10 years on, a new use has been found for the submarine base: it is the new home of the Jacques Brel Hall, formerly on the opposite quay. Breaking with the austerity of LIN, the Belgian architects from the 51N4E office and the Nantes-based Bourbouze & Graindorgehave invented a “box in a box” covered in warm-coloured materials: a gold metal exterior, brown wood for the interior walls and an orange-coloured floor, and then, at the very end, a glazed wall overlooking the basin. This autumn, the port concealed inside the Base will be almost complete.

Working with the symptom
How can the city make progress with a two-pillar communication strategy in relation to the Base, when one of the pillars originated in so much destruction? The only thing to do would be to prescribe the symptom and work with it rather than against it. The Base stubbornly continues to haunt the debates of the municipal council, which questions whether it has made the right decision to preserve it. During the last municipal election campaign, on 21 February 2014, the local newspaper L’Écho de la presqu’île asked the eight leading candidates: “Should we demolish the Base?” The only one determined to keep it was the Socialist party candidate, David Samzun, who was elected one month later.

How can you maintain a corroded, porous, leaking reinforced concrete building intentionally “sabotaged” by constrained executants? It costs a fortune! The figures are kept relatively secret. €1 million annually is often referred to, just to maintain the concrete. Yet to destroy it would be exceedingly expensive. Some people say it would cost €250 million and afterwards how would this port look without its gigantic yet fragile monumental tomb? Batteux remained obstinate, “from the very beginning, I have said that we should own this architecture, and not inhibit it or deny how Saint-Nazaire was when it was rebuilt.”

Legacies
Joël Batteux left the City Hall in 2014 after a 35-year term of office, leading 305 municipal councillors. In the absence of a consensus before the municipal elections on how to follow up the project, the consultation named “Ville-Port 3” remained on the drawing board and attracted some fine participants in 2011 (Grether, Devillers, Obras, etc.). There was no more master plan and what could be thought of as an overambitious project remained incomplete, since this third phase set out to tackle all of the port area, even though the second phase had already partially failed in its goal of recovering the Petit-Maroc Peninsula opposite the Base. The Venetian urban planning duo Secchi-Viganò, who won Ville-port 2 in 2003, had already walked out on the project.

David Samzun, mayor since 2014, and deputy to the urban planning office since 2006, marked a continuation, pursuing the idea of reusing the Base, while focusing more unashamedly on the seafront than his predecessor, banking on tourism. The Chantiers de l’Atlantique shipyard, the backbone of the region’s economy, has made an incredible comeback. With the scaling up of offshore wind turbines, the port is attempting to diversify its activities, and the aviation industry (Airbus) is thriving. “Saint-Nazaire-sur-Mer”, as it could be called, having unconsciously repressed its seaside resort for far too long, has now become very popular. With the new Place du Commando, completed in June 2018 and developed by the Nantes landscape architects Phytolab, the recovery is complete right up to the harbour edge. This should attract a sizeable leisure craft industry in the early 2020s, and result in the certain revival of the old wet docks near the Base. One sure sign of this revival is that the area has been listed under “Large Facilities” since 2017 in the new PLU (Local Urban Development Plan). Meanwhile, the 480,000 m3 concrete tomb-like Base was awarded the title of “heritage of the 20th century” in September 2010. The Base is no longer an eye-sore to be forgotten. ■ 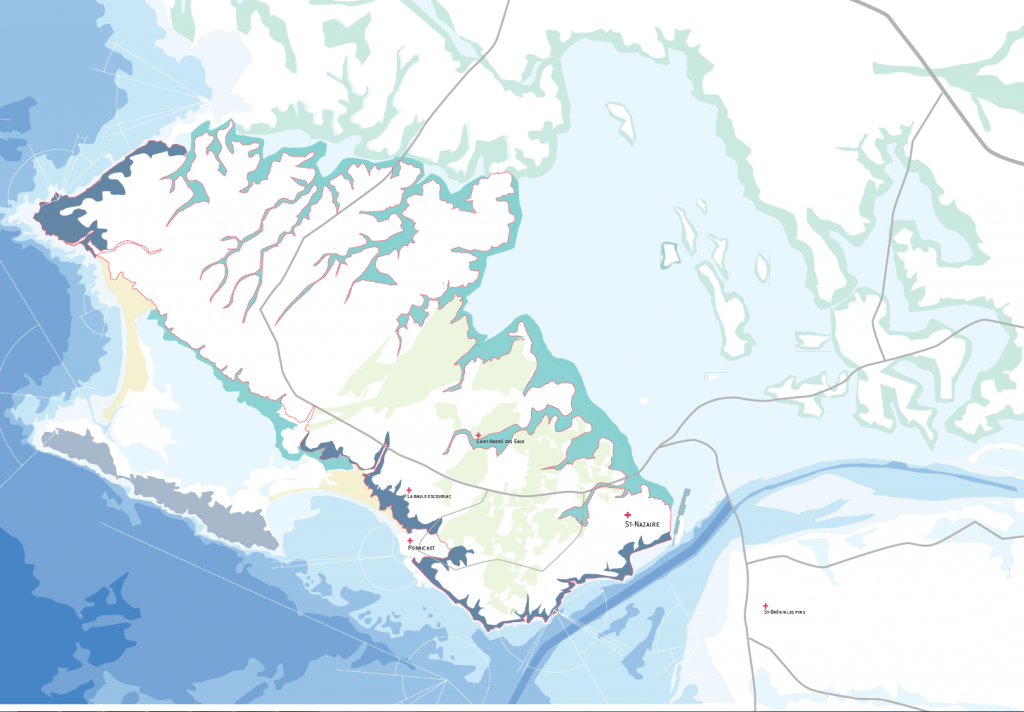 The invisible cities of Ter

This July, the founding partners of Ter were awarded France’s prestigious Grand Prix de l’urbanisme by ...More about

The Marseillaise, here and now

With his lastest building, the Marseillaise, Jean Nouvel confirms once again that he is the architect ...More about