A mixed reaction to the climate agreement

It would be an understatement to say that observers are divided about the climate agreement adopted on December 12, 2016 within the framework of the COP21. Between the supporters and the opponents, a few voices dare to express measured optimism, like the reporter Pierre Lefèvre’s one, journalist specialising in sustainable development.

The climate conference came to an end on December 12, 2016 to the sustained applause of the representatives of the countries present, commending an agreement described as historical in the fight against climate change. Admittedly the aim of the agreement is ambitious. For the whole of the globe, it undeniably represents a strong political signal after the failure to reach an agreement in 2009 in Copenhagen.

Admittedly, we must be glad there was an agreement, but at the same time we must draw attention to its insufficiency and the need to act without waiting for it to come into force in 2020. Although on one side target figures have been set in relation to the increase of the Earth’s temperature, on the other, the required greenhouse gas reduction targets have not been identified. The text only mentions an emissions peak to achieve “as soon as possible”. Moreover, the agreement is morally but not legally restrictive. No penalty system is proposed if states do not respect their intended emissions reductions commitments (known in UNO jargon by the acronym INDC, i.e. Intended Nationally Determined Contributions).

Another problem that is just as important is that trajectory of this reduction in emissions leads well beyond a 3°C increase in temperature, and not 2°C. Therefore, we should already be complying with these commitments and they should be increased. Furthermore, the agreement plans to have them reviewed every five years from 2025. Yet the INDC in developing countries are partly or fully conditioned on aid, as in the Philippines. Admittedly, the developed countries committed to mobilizing finances to enable developing countries to reduce their emissions and adapt, but no figure was given: the annual hundred billion dollars announced back in Copenhagen has been removed from the text. Aviation and maritime transport, which represent nearly 10% of the world’s emissions, are not in the agreement after all. They have been exempted of all effort. Also removed from the text was the mention of respecting human rights and the rights of indigenous peoples, who are particularly affected in their lifestyles and culture by the effects of climate change. Finally, although the poorer countries have won the battle in relation to 1.5°C being indicated in the text, it has come at the cost of renouncing strong measures concerning losses and damage. On this subject, the text mainly refers to the mechanisms negotiated at the Warsaw COP19 in 2013, which remain fairly weak and vague. In this climatic justice has lost a great deal.

Project for the wooden pavilion made of reused materials for the site of the COP21 by Encore Heureux.

The COP21 agreement does not fundamentally question our model of development. Nor does it commit the earth to a major and essential change in ecological policy. However it was naive to hope for more, when 195 countries were coming to a consensus. Yet, the clock is ticking and the essential economic and, in the end, civilizational transition that would change our relationship with the world, make the move to a low-carbon economy and therefore avoid a climate catastrophe is a major challenge. The first step has been taken, the agreement set out a structure and dynamic, but there is still a very long way to go, and in reality we have at most twenty years ahead of us to carry out the essential reforms, according to the researchers. If we are not steering the right course, limiting global warming to 2°C will be a lost hope. Yet, we have no choice but to believe in this possibility. Morally, we owe this to our children. So, there is much work to be done for the COP22 in Morocco at the end of November.

In its 411 issue, available in newsstands from March 18, L’Architecture d’Aujourd’hui dedicates a special report ...More about 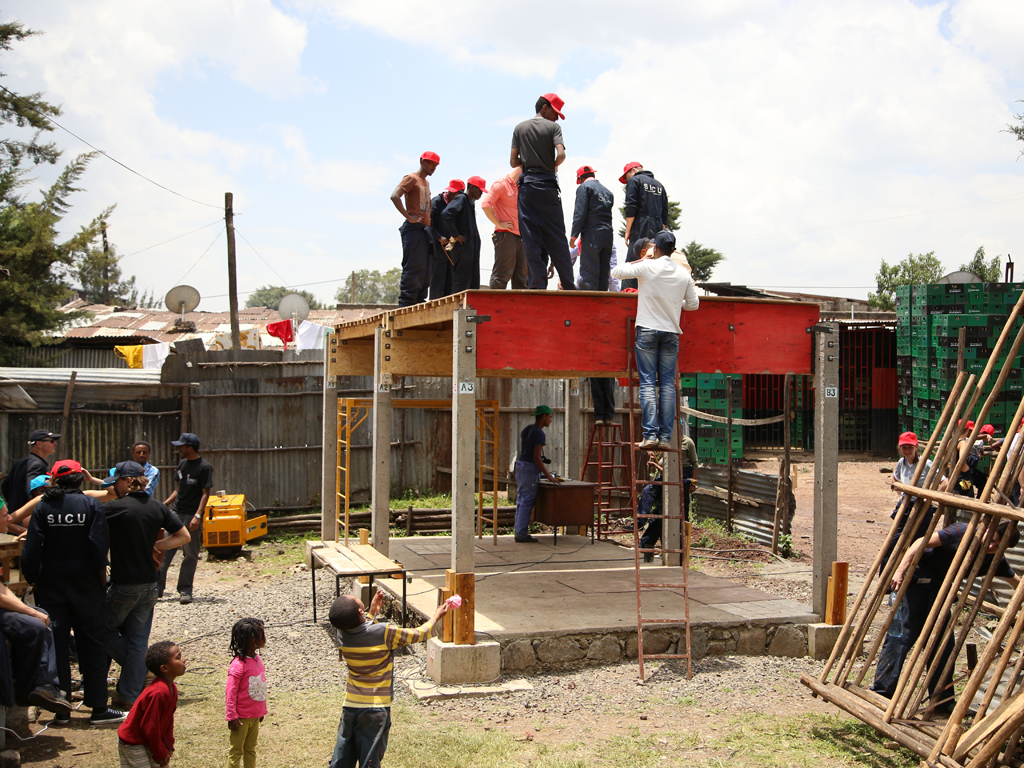 From the affected person’s view, war, as such, primarily means the destruction of homes. In the ...More about