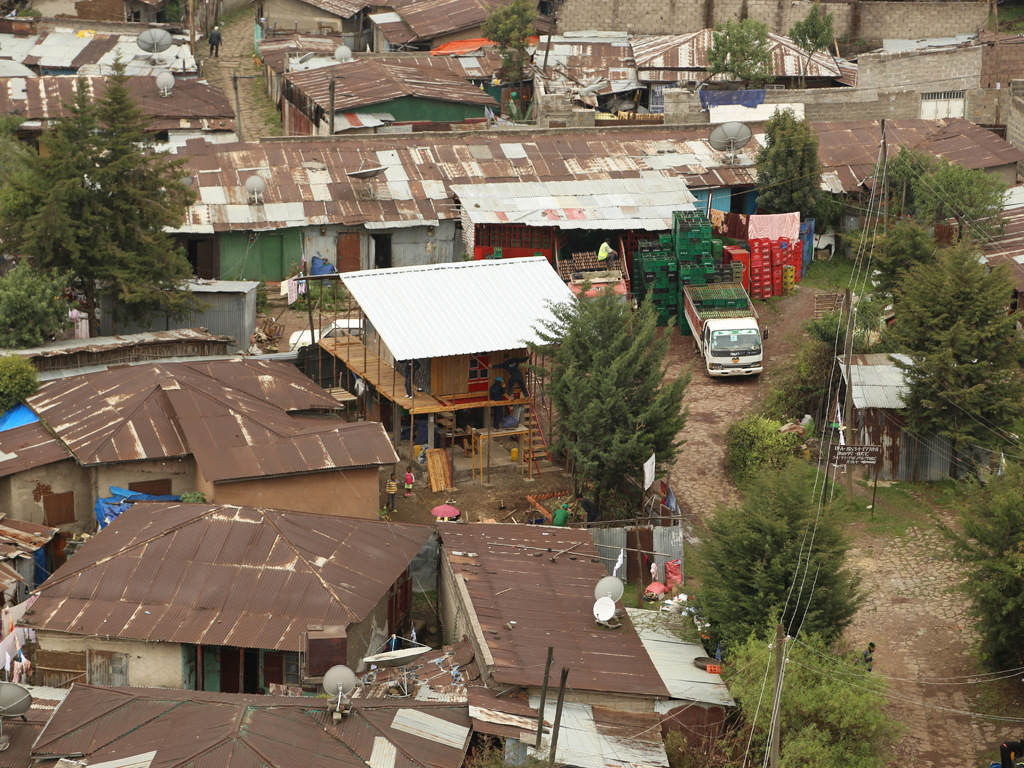 From the affected person’s view, war, as such, primarily means the destruction of homes. In the worst cases it means the painful loss of family members, friends and fellow citizens, but also the destruction of the centre of man‘s existence: his dwelling place. Returning this fundamental right to a safe and adequate home is a challenge addressed by the Bauhaus University Weimar in Addis Ababa – a genuine case-study during the current European refugee crises. A column by Dirk Donath.

The Bauhaus University Weimar and the Addis Ababa University have collaborated on visionary urban and architectural projects, since 2008, but also on building experimental full scale projects. They have always focused their attention on their inhabitants, social interventions and human needs. The hyper-urbanized and rapidly sprawling capital Addis Ababa calls for delicate solutions, knowing that social cohesion inside existing neighborhoods (the so called “safer”, first implemented by Menelik II during the foundation of Addis Ababa in 1886) is being torn apart by the destruction of established city fabrics (slums) and the insertion of new, yet impersonal mass housing projects (condominiums) without any historical content.
The scarcity of resources (building materials and their embedded energy) and the ever increasing ecological challenges at both global and regional levels, demands a high degree of efficiency and sensitivity in the making of human housing. State-of-the-art planning methods (parametric approaches, BIM, computational urban and building analysis) were used to translate these human needs and ecological demands into adaptable solutions that enrich the high and increasing Ethiopian construction market.
Between 2012 and 2014, three experimental dwellings were built in Addis Ababa. Students, teachers and researchers from the Bauhaus University Weimar and the Addis Ababa University questioned daily routines in order to reveal new experiences and erect future-oriented prototypes. SECU is a project focused on natural resources from the agriculture industry utilized as built material and made entirely out of panels made of compressed straw. SICU is a prototype based on robust prefabricated systems using local skills and tools availability for self-build houses. MACU is the result of parameterized numeric modeling to fabricate building parts, which allow self-made constructions of high quality. In other words, the three housing solutions are the product of a culturally and socially motivated design investigation and can respond to highly flexible occupation scenarios. The proposed way of building promotes economic, cultural and social sustainability by respecting existing ways of living, while introducing improved contemporary housing standards. The inhabitants contribute with their own skills, adaptable techniques in contemporary circumstances, and financial means to complete the structure according to their needs and wishes. This creates a need for parallel strategies to the existing Ethiopian governmental housing programs, allowing homeowners to remain in their existing local environment where their families have resided for decades and where they have established income and supporting social structures. 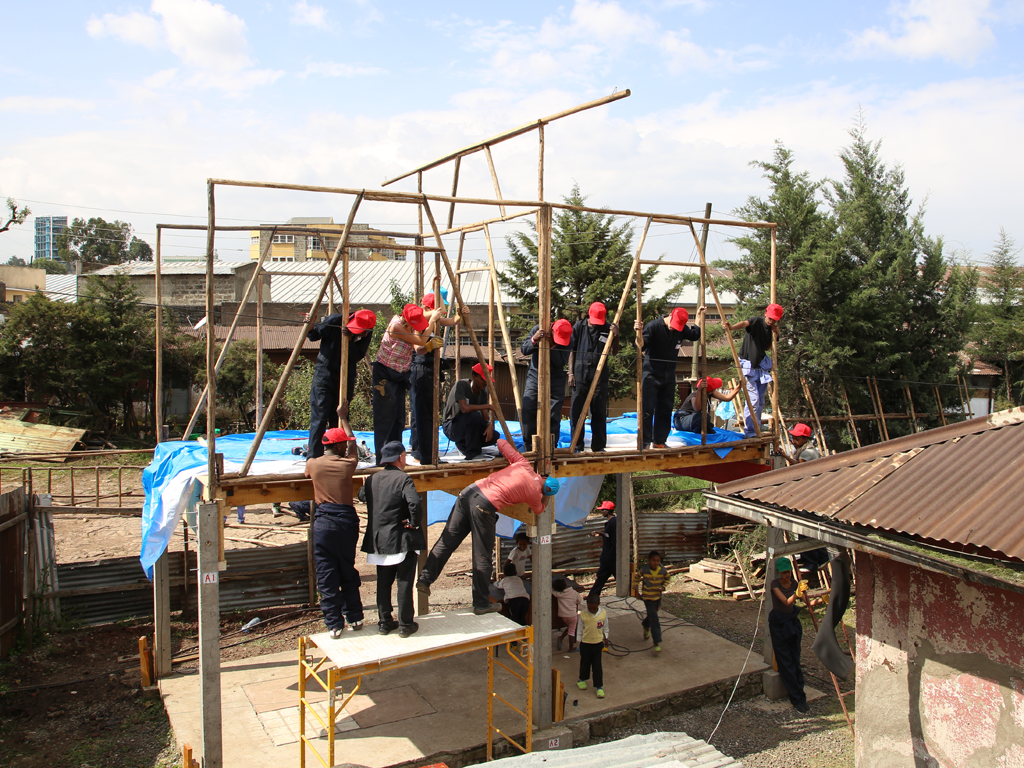 Looking back at more than 10 years of cultural and technological exchange between two different cultures, the influx of refugees into European countries opens up a huge opportunity for a long-practiced field: respectfully and cautiously interweaving newly arrived human beings into new geographic and cultural environments. Decreasing the stress of the newly arrived and providing shelter is the main goal of any urban and architectural strategy.
As most of the European urban and architectural strategies for social living have failed, new ways of interconnecting and interacting human correlations must be devised and discussed. The know-how and planning skills that stem from traditional and recent Ethiopian urbanism and architecture can be of great benefit in the current situation in Europe. The social values inherent in Ethiopian society can be passed on and transformed to meet the present demands in a changing European social tissue. The refugee crisis is a worldwide phenomenon that needs to be solved internationally in a way that addresses cultural sensitivities and transcends international borders. Opening the research field to both German and Ethiopian students will enable the young and upcoming generation of decision makers to plan and sculpt their own future. 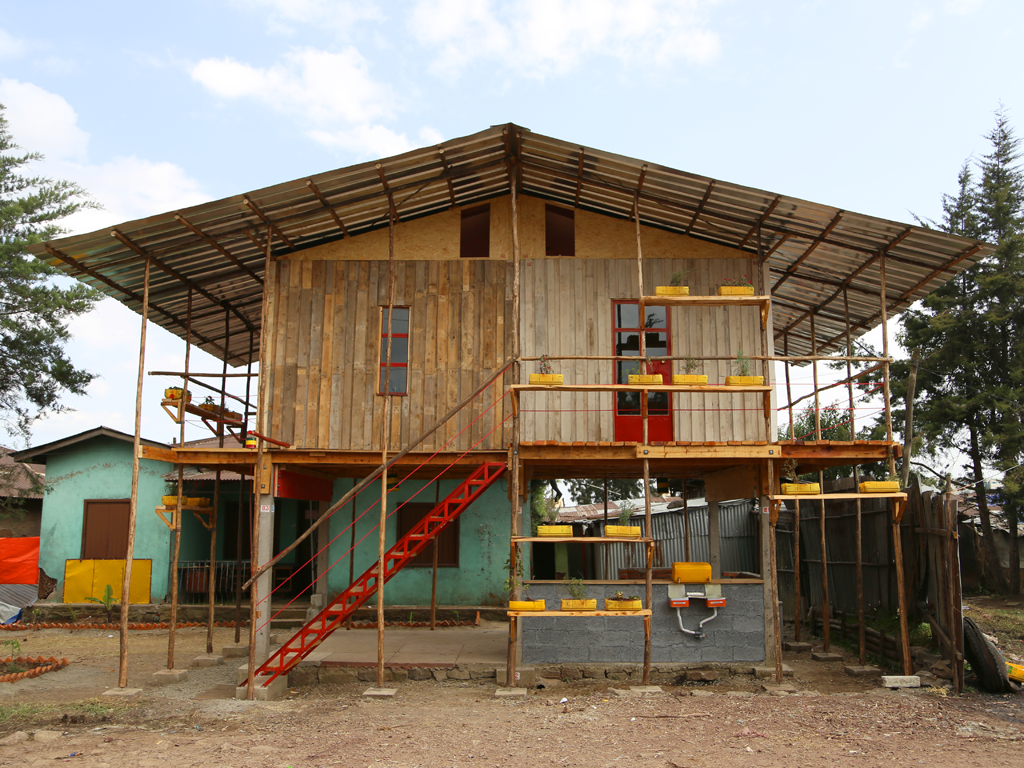 Author’s biography
A Full Professor in Germany at the Bauhaus University Weimar and a Chair holder in “planning systems” at the faculty of architecture, Dirk Donath has been teaching, since 2008, as a Visiting Professor in the field of “Building Construction” at EiABC – Ethiopian Institute of Architecture, Building Construction and City Development at the Addis Ababa University. Based on an international research project, “concept-test-realization” in 2012-2014, he builds houses for urban areas in Ethiopia on a 1:1 scale providing a realistic and future-oriented proposal. The prototype SICU won the 3rd prize of the International HOLCIM Awards in 2014.

His project has been published in our AA Holcim Awards 2014 special issue, to purchase on the online shop.