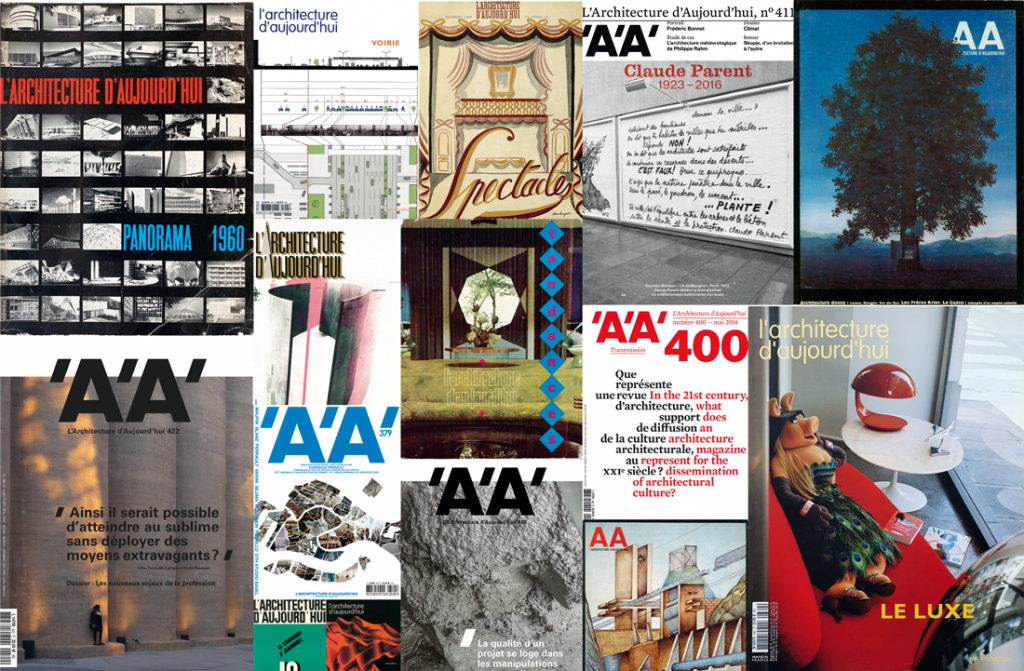 For its anniversary issue AA invites contemporary architects, from France and elsewhere, to share their favorite issue. Read their full contributions in the new issue AA and Paris: 90 years of projects, available on our online shop. 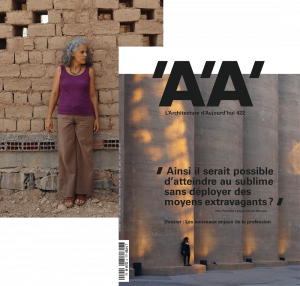 No single cover stands out. The most recent one (AA 438) is a good example of what I look for. It takes us from one place to another, broadens our minds, and continues to form and inform. The image is always eye -catching and helps to get the idea across. Sometimes it relates closely to our practice, sometimes not. But it is always fascinating. As I go through the back copies, moving between subjects, looking for what was meaningful in our daily search for intellectual nourishment, and scan the issues, packed like sardines or scattered across the library, I realise that the most recent covers with an image and a quote are the ones that appeal to me most. There is something open -handed and non -elitist about them. AA 422 is probably one of my favourites: “It is possible to achieve the sublime without investing vast resources?” This quote from Gilles Perraudin, set against that timeless wall, echoed previous issues. The aggregated image is a nod to Louis Khan and his followers, like Hassan Fathy and André Ravéreau. 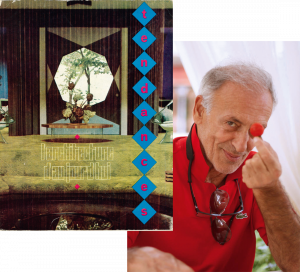 From the 1960s to the 1980s, AA was also published in Russian for Soviet architects. I was struck by the issue devoted to Claude Parent, his designs, and especially his theory of inclined planes. It made quite an impression. I remember my Soviet colleagues sharing some wonderful projects with me, and some content from AA, which gave them a fairly detailed, comprehensive and realistic insight into what was going on in the world of architecture in the West, behind the Iron Curtain. It made my Soviet colleagues and myself laugh because here in Spain under Franco in the 1960s and 1970s we were in the same situation: AA was our Figaro, Le Monde or L’Humanité. 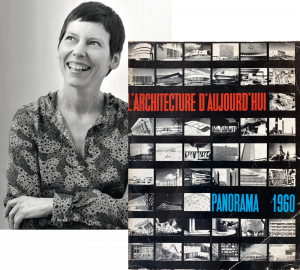 My parents were both architects and they began subscribing to AA as students. So, I have an extremely fine collection of back issues, including some of the first 20 issues, which are real collector’s items. One of my favourites is the double issue No. 91-92, “Panorama 1960”. Sharing the page with some eye‑wateringly outdated advertisements are the projects and built designs of leadings architects such as Mies van der Rohe, Le Corbusier, Arne Jacobsen, Louis Kahn, Ieoh Ming Pei, Buckminster Fuller, Eero Saarinen, Richard Neutra, Pier Luigi Nervi, and Guillaume Gillet, who marked an entire era. 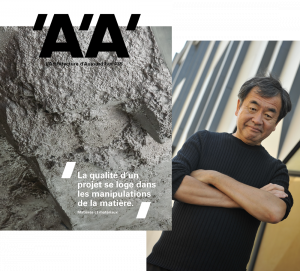 The choice of Kengo Kuma
Kengo Kuma and Associates

This remarkable issue explores materials and the important role they play in the execution of an architectural work, rather than the morphology of its structure, which dominated architecture in the 20th century. It shows how we can free ourselves from concrete and steel, the main materials used in the last century. What interests me most is the possibility of using waste as an architectural material. 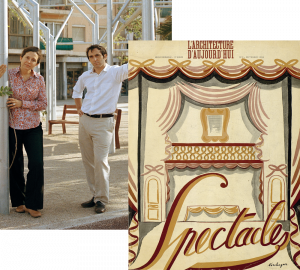 Working at the moment on the renovation of the old Théâtre des Variétés in Brussels, built by Belgian architect Victor Bourgeois in 1937, we discovered that Bourgeois was a member of the L’Architecture d’Aujourd’hui patronage committee during the 1930s and 1940s. In this period, three issues —October 1933, September 1938 and May 1949— were dedicated to show the culture of spectacles and the world of theatres, cinemas and music halls. The colourful cover of the September 1938 AA issue is a clear invitation to dream and enter into the magazine as if through the curtains of a theatre… Is the celebration of AA’s 90th Birthday going on? Toutes nos félicitations! 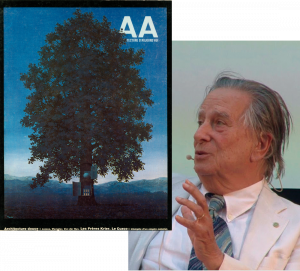 The choice of Paolo Portoghesi

It is a great pleasure to contribute to this reflection on the cultural role of this review which has been integral to the emergence and development of modern architecture. I began reading L’Architecture d’Aujourd’hui when I was a student in Rome in the 1950s. It was the leading “European” review and for Italy, after twenty years of dominant nationalism, it expressed a certain vision of architecture that was open to the identity and diversity of spaces, without seeking to minimise the advances of the “heroic” period of modern architecture. My generation of architects – Gabetti, Aymonino, Rossi, and Canella —always saw its vocation as the reappraisal of early modernity within a philological framework. I was lucky enough to buy the first vintage copies of this review in an antiques shop, still with its legendary metal spiral binding. I keep issue No.10 from the fourth year, devoted to Le Corbusier, in my library next to my first editions of Palladio’s Quattro Libri, Valery’s Eupalinos, and Opus Architectonicum by Borromini. 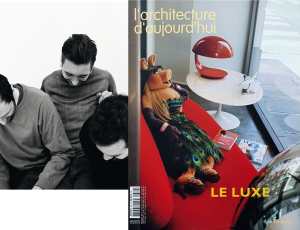 Happy birthday AA! While looking into the old covers, we came across this one, fantastic! It is really good to see a magazine that can talk seriously about architecture while being able to take a critical and ironic distance. The image of architecture / architects has always been one of our main interests. Out of desire and a need for self-criticism first of all, but also and above all wanting to understand our profession with hindsight (we hope), wit (we are working on it) as with humor (on this we are not bad, are we?) 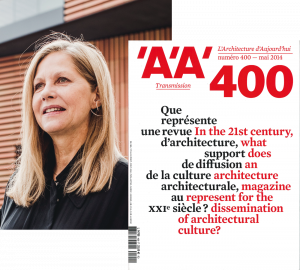 No.400, MAY 2014
The choice of Martha Thorne
Executive Director of The Pritzker Architecture Prize & Dean of the IE School of Architecture and Design

The role of AA in the world of architecture is to question and encourage us in the field to see things from different viewpoints. By questioning the role of publications in its 400 issue, with a purely graphic cover, AA shows us, once again, that it is not afraid to deal with complex issues, raise important issues, and above all to keep architecture, in all its facets, relevant for the 21st century. 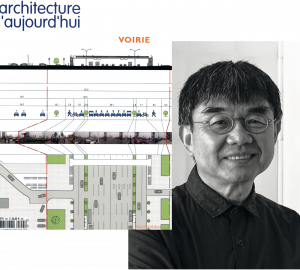 I first saw your magazine, L’Architecture d’Aujourd’hui, at home in Beijing in the early 1980s. My father, Zhang Kaiji, who was also an architect, brought a few copies back after working on an exhibition entitled Environnement quotidien en Chine at the Centre Pompidou in Paris. Today, the oldest issues of AA I can find in my office are No. 352 from May-Jun 2004, in which our architecture and art projects were featured under Actualités, and No. 355, from Nov-Dec 2004, on the cover of which was our research on the streets of Beijing. 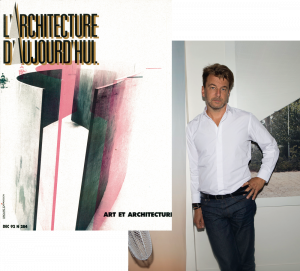 Over the last century and more, the dialogue between the visual arts and architecture has been constant and constructive but also cautious. Each discipline has sought very tentatively and to varying degrees to give sustenance to the other. Reciprocal design processes and loaned words help transcend the form, materiality, and atmosphere of places and installations. Multiple experiments have left a question mark hanging over the hybridisation of these two disciplines, which elicits a subjective response, as Le Corbusier is fond of reminding us. This formed the backdrop to two extremely engaging issues of L’Architecture d’Aujourd’hui in 1992 and 1993, which sought to understand the transfer of knowledge and the creative processes it entailed. Or in other words, how architecture is inspired by art, and how art is inspired by architecture. 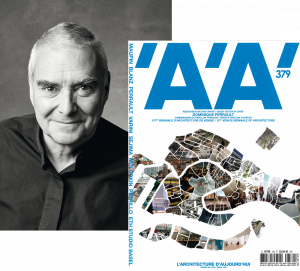 If I had to pick one issue of L’Architecture d’Aujourd’hui, the leading review in its field, it would obviously be No. 379 from 2010, for which I was lucky enough to be the guest editor-in-chief. It was published to coincide with the second Venice Biennale of Architecture and the cover featured an imaginary city map with a patchwork of images and photos of cities and urban developments. Exploring the question “What is a metropolis?”, it asked a group of architects and people working in the urban, cultural, and creative sectors, including Kazuyo Sejima, Felice Varini and Frédéric Mitterrand, to share their perspectives on the subject. It also built on some of the themes explored in Metropolis ? – the exhibition I curated at the French pavilion. In Venice, we took a closer look at four French metropolises —Bordeaux, Lyon, Marseille, and Nantes St Nazaire— with relation to Grand Paris. The same issue of AA also offered a perspective on four other cites: Bogota, Singapore, Mumbai, and Sao Paulo.

No.411, MARCH 2016
The choice of Pascale Dalix and Frédéric Chartier
Agence ChartierDalix

No.411 was a tribute issue to Claude Parent, architect of paths, poetic minerality, and the oblique function, who in 1972 made this billboard-sized statement on the Champs Elysées about the creative power of nature to colonise “cobblestones, tarmac, and cement”. He was advocating a world where nature would be the new norm for “suburban dwellers”, and cities would become the physical embodiment of a new equilibrium. His slogan is an appeal to architects, then and now, to try out new combinations, to move things along and, in short, to build the “exhilarating cities” championed by Lettrists twenty years earlier.

AA AND PARIS: 90 YEARS OF PROJECTS
IS AVAILABLE ON OUR ONLINE SHOP.

In November 2020, AA celebrates its 90th anniversary: 90 years of debates, investigations, 90 years of ...More about