Faced with the containement imposed on all to counter the spread of the Covid-19 virus, many architects had to adapt their practice and their working method to this new rhythm of life. The “Locked down” series gives them a voice, by questioning their vision of the situation – but also their cultural recommendations.

Today, we are going to United-Kingdom to meet Sam Jacob, founder of Sam Jacob Studio. 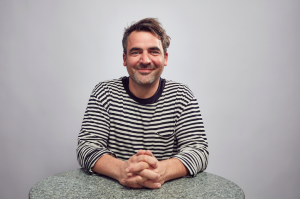 L’Architecture d’Aujourd’hui: Where are you locked down and how did you get organised to continue working
Sam Jacob: I’m holed up in London with my daughter, so the home is the office and the school now. Computers from the office distributed around London in corners of living rooms, clients scattered too. Building sites are now closed. Still some sentiment of drive remains in some projects. We even had a planning approval this week – which came as quite a surprise that the bureaucracy of the built environment is still in action! For some projects it’s the perfect time to think issues through, for others it’s into the ice box till the future becomes clearer. I think one question though is should we really continue to work, at least in a way that doesn’t recognise the profound change that has happened. It might be a coping strategy in some ways, but there is desperation to it too – holding on to a world that has (at least for now) vanished. Perhaps its important to recognise what forms of work might be useful or productive in the circumstances.

Are containment and architecture opposites?
I guess we’ve never quite thought about the idea of interior and exterior in such a high contrast way! Threshold has taken on such significance, the home vs the rest of earthly space, proximity and boundary between each of our bodies, between our bodies and the environment… These are all active parts of the decisions we are making about the spatiality of our daily lives.
We should remember that although a professional architects time is spent mostly with deciding where walls should be built, how space should be divided and so on – i.e. acts of ‘containment’ – what architecture is really about is spatial relationships, how they corall patterns of behaviour, how they manifest abstract organisational ideas into space. So while containment is a part of architecture, it is just a small part of architecture.

What lessons do you think you will learn from the ecological impact of this crisis?
Maybe we will remember the fragility of the world. Perhaps we’ll think about how close to collapse we have pushed everything – just in time, just getting by – the strains and fissures that often felt like our personal psychological failures were actually very real external forces. Forces that were ideological choices made by systems that governed us. What’s been revealed is how close to the surface the collapse of normality has been – for perhaps a very long time. And how ‘normality’ relies on such a complex network of connections that combine the emotional / infrastructural… psychological / economic… Perhaps we might also reverse Hannah Arendt’s famous phrase and remember the importance of the ‘banality of good’.

A film to see / a book to read during lockdown?
My favourite book about interiors – the domestic space that the entire world is now inhabiting for the foreseeable future –  is Joris-Karl Huysmans À Rebours. It’s a novel chronicling the decadent retreat from society into an ever more refined interior space. Our anti-hero (almost) never leaves the house, instead increasingly absorbed by the possibilities of lifestyle choice… Every chapter deals with a different fundamental of lifestyle – music, food, the problems of interior decoration (a particularly spectacular chapter)… If you do read it, just please be kinder to your tortoise!

What do you expect from this experience?
I think a real test – of the frameworks we rely on so much to support our ways of life, of ourselves without the routines that we use as the armature of our existence, of endurance, of things that have appeared so completely real and solid but now feel so provisional. It feels like none of us will emerge from it the same – that we will have to develop new ways of understanding, creating and behaving in the world. On the other hand, never underestimate our ability to forget too …

What impact does this containment have on the perception of both your workspace and domestic space?
For better or worse, I’ve lived a long time in a smeary streak between the two. If anything, now that it’s enforced rather than chosen, I feel like some more separation might be a good thing. It’s hard though – if you feel that blurry division between art and life is an important way of thinking (the personal is the political, thinking locally to act globally, and all those other clichés) it’s a very different from the distinction set up between the professional and personal sides of life. Perhaps this situation helps us understand that those distinctions are far more artificial than they felt before. That domestic work is also work, that ‘work’ is not only something recognised on a CV. Perhaps if we relearn how to think about these ideas we might release ourselves from the tyranny of ‘productivity’ that has been so characteristic of our era. 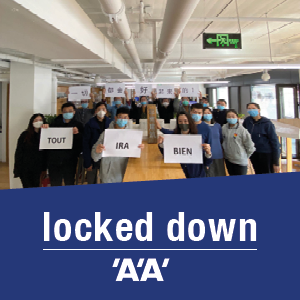 Faced with the containement imposed on all to counter the spread of the Covid-19 virus, many architects ...More about

Founded in 1990 and closed in 2013, FAT – for Fashion ArchitectureTaste – was a London-based of ce with flamboyant ...More about