Zaha Hadid: the Price of Weightlessness

If there is such a thing as starchitects, Zaha Hadid was without a doubt one of the most prominent ones. Four years after her death, Zaha Hadid Architects, now led by Patrik Schumacher, continues to build pieces of architecture that are as tremendous as they are iconic. Completed in 2019, the Changsha Meixihu International Culture and Art Centre is one of the latest. And one that honours her memory.

In the introduction to his second (out of ten) book(s) on architecture, Vitruvius narrates the story of how the Macedonian architect Dinocrates was able to draw Alexander the Great’s attention to himself. Frustrated with the limited effectiveness of recommendation letters, the architect decided to rely on “his good looks and dignified carriage,” which he emphasised by oiling his body and draping his left shoulder with a lion’s skin. Dinocrates’ excessive self-representation did not go unnoticed, prompting Alexander to ask the architect to present himself and ultimately also his megalomaniac project for the shaping of Mount Athos.

Inevitably, this tale imposes itself as historical evidence for the figure of the starchitect and the iconic building as his signature product. But it also emphasises how intrinsically linked the client’s choice of an architect can be to the aura of the latter. Let’s fast forward two millennia and replace the testosterone-loaded Dinocrates with a cosmopolitan female architect whose extraordinary œuvre is perceived as inseparable from her exceptional persona. There’s little doubt that most people’s inner eye will morph the lion-skinned Dinocrates into Zaha Hadid, confidently flaunting an asymmetric black dress and a glamorous cape over her shoulders.

“Zaha’s performance during the fourth and fifth years was like that of a rocket that took off slowly to describe a constantly accelerating trajectory. Now she is a PLANET, in her own inimitable orbit. That status has its own rewards and difficulties: due to the flamboyance and intensity of her work, it will be impossible to have a conventional career. She owes it to her talent to refine and develop it over the next few years.” Those are the words of Rem Koolhaas in the AA School of Architecture fifth-year report, 1977.

Zaha’s genial excessiveness is being missed, but can still be traced in her projects, of which several have been continued by Zaha Hadid Architects (ZHA). Such as the recently completed Changsha Meixihu International Culture and Art Centre that puts on show a seductive blend of fluid aesthetics and sculptural qualities. The project is a confluence of three programs and institutions: two theatres and an art museum, brought together around a generous public space. China showing-off its wealth? The flamboyant Zaha ruining yet another client? (Did she actually ever?) In the current context of sufficiency, the adoption of such a generous and sumptuous, and therewith also material-intensive and costly, architecture is not only surprising but also difficult to embrace in an unbiased manner. However, let’s try.

ZHA won the competition to masterplan the 10 hectares large site located on the edge of the Meixi lake in 2011. The alternative competition designs of Coop Himmelb(l)au and Hans Hollein (two of the total of five invited offices) confirm that the client’s brief demanded something daring and grand. Indeed the project is the centrepiece of a massive infrastructure plan to revitalise Changsha, the capital of China’s province of Hunan. Against the background of this superordinate ambition, excessive employment of labour and material may already appear as more relative and in reality, even appears to have become part of the founding myth of the entire endeavour.

Local media proudly emphasise that the structure – shaped after a blooming hibiscus flower – makes use of more than 22,000 tons of steel, echoing the structural complexity of Beijing’s Bird’s Nest (the stadium designed by Herzog & de Meuron for the 2008 Summer Olympics). The curtain wall covers an area of nearly 70,000 square meters and consists of nearly 12,000 (or 14,000, depending on the source) pieces of individually-shaped curved elements. 2.8 billion yuan were invested for completing the 115,000 square meters large centre with a 1,800-seat grand theatre, a 500-seat multi-functional theatre and an art museum that features eight exhibition galleries. All lit by 20,000 pieces of LED and held together by 450,000 bolts, assembled by 40 construction units and thousands of workers “in the time span of 1,770 days and nights.”

But do these openly excessive means justify and match with the programmatic ends of the project? It would appear so: a year after the opening of the grand theatre in September 2017, the number of hosted performances amounted to 226, totalling an audience of over 200,000. On the contrary, another of Zaha Hadid Architects latest buildings, the MICA art museum – which, with its 10,000 square meters of exhibition spaces, approximates the size of ZHA’s MAXXI in Rome – is not delivering a clear image yet. It began trial operations with an immersive media art exhibition at the end of November 2019. Not even two months later, almost all Chinese museums closed following the Covid-19 pandemic lockdown in Wuhan and other cities.

There are no comparative figures for this, but Zaha appears to have been more frequently attacked by the press or politics than average. This occasionally led to angering and unfair losses, like the one of Tokyo’s New National Stadium. While it seems logical that “excessive architecture” may fuel excessive costs, it is unclear if such delicate situations did as well arise in the context of the Changsha Meixihu International Culture and Art Centre. Zaha’s buildings are more expensive than others, but the office is generally known to be rather outspoken about this aspect. Rumour has it that it’s due to not having downplayed the real costs of their project, that ZHA did not win the competition for the Philharmonie de Paris. Yet, the price tag for the Changsha Meixihu International Culture and Art Centre complex amounts to 70% of the final one for Jean Nouvel’s Philharmonie.

Reassured by these numbers, even the most puritan eyes may be entitled to explore the sinusoidal lines of the ZHA’s project without shame or guilt, as if admiring Zaha in one of Rei Kawakubo’s unique dresses she loved to wear. In an inspiring 1983 interview with Alvin Boyarsky (published in the epic GA dedicated to Zaha’s early work) the conversation partners try to anticipate the realisation of the architect’s weightless projects. An architecture of “floating elements within a given space,” as Zaha describes this notion in the context of unrealised The Peak project in Hong Kong. Judging from vertiginous photos and numerous videos (the project seems to be the ideal playground for drone-footage), such a zero-gravity condition has at least in parts been achieved at the Changsha Meixihu International Culture and Art Centre. 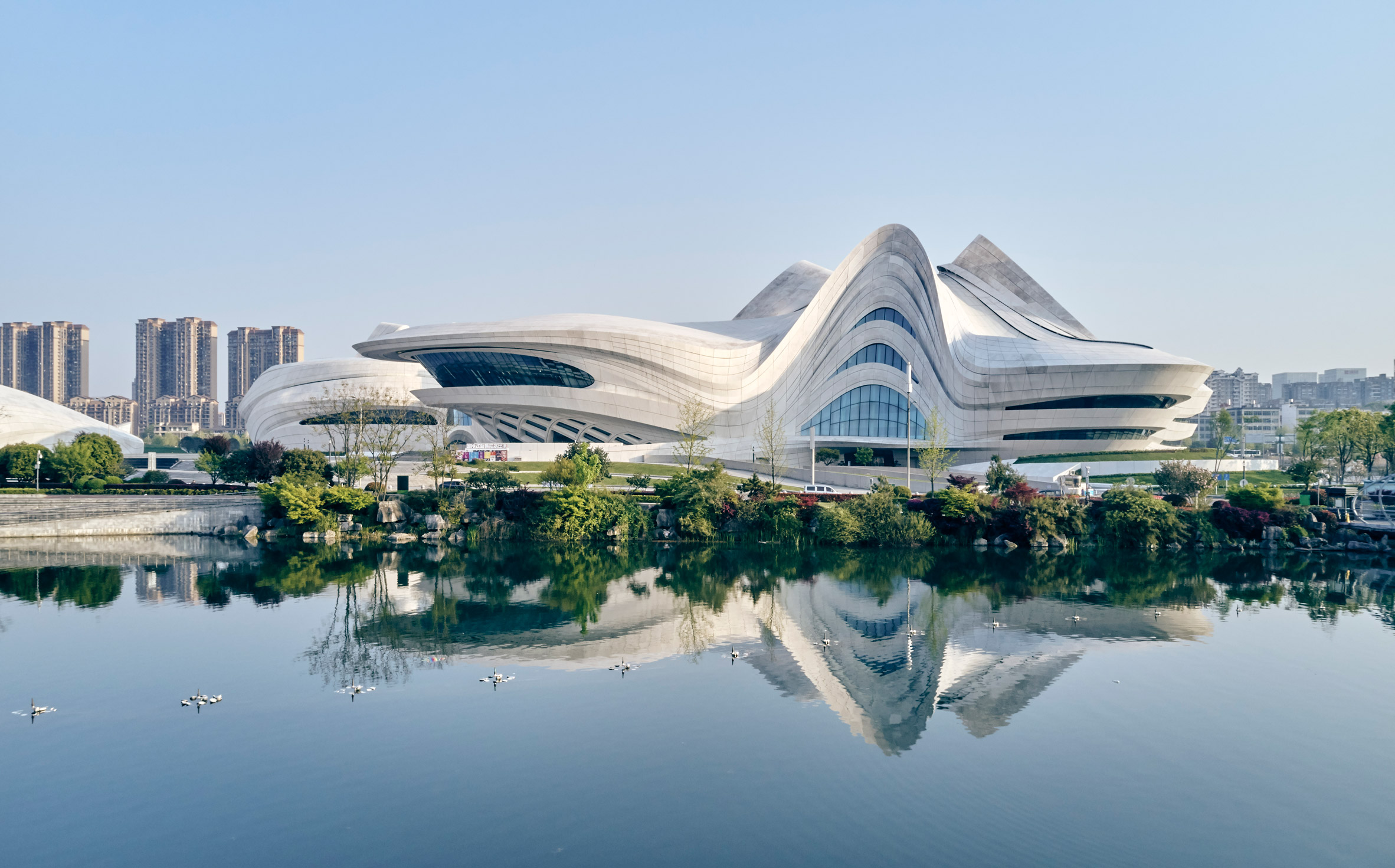 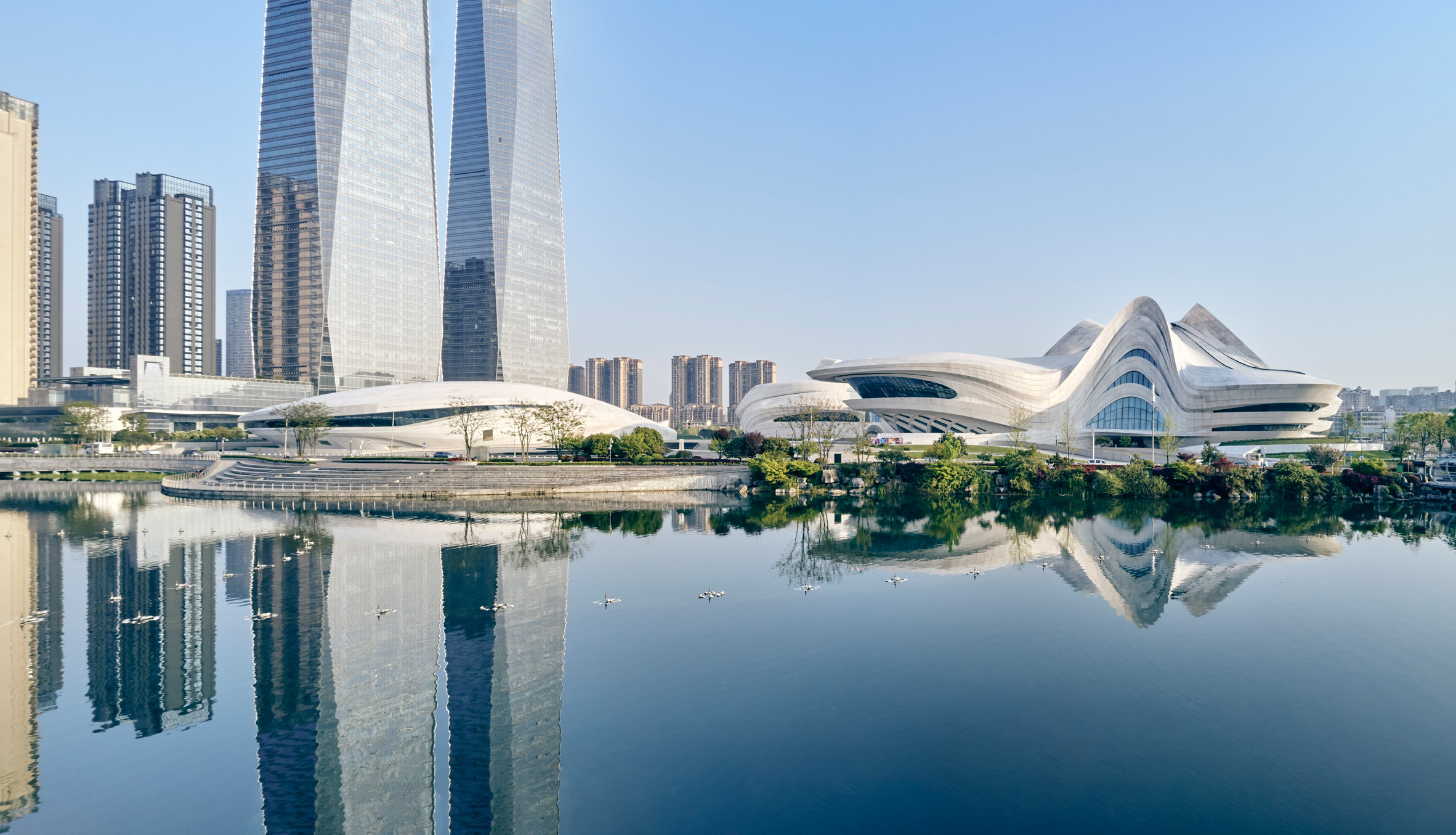 In times of economic and ecological frugality, is there still room for excess? While it can ...More about

The folly of grandeur?