The School of the Collective

Joaquim Moreno: Classroom, Architecture of Adolescence looks at how the most common and widespread learning tool – the classroom – shapes learning. You have built several schools in South Africa. What is your experience in this area?

Heinrich Wolff: It was while working on a school for neuro-atypical children that we became aware of the need to accommodate a multitude of different needs. Some of the children we met are very intelligent but have difficulties in socialising. Others do very well socially but have difficulty acquiring new skills. The purpose of this school is therefore to bring together two groups of pupils – children on the autism spectrum and children with learning disabilities – who traditionally have been kept apart. This bringing together allows them to affirm each other through their collective experience. This is a fundamental aspect of the design we have proposed.

When we were commissioned for this school project, the specifications called for classrooms with a central corridor. It also called for spaces that reflected a domestic world and relationships. But it did not address the question of relationships with the city, coexistence with others and the collective dimension of learning.

The crucial point of our intervention was precisely to propose that the space of the collective be the most important space of the school. In addition to basic education and training, the desire is also to help the students to take their place in society, both economically and socially. This led to the idea of building the courtyards with an A-frame between the classrooms.

These spaces, which are both open and covered, allow children, who are sometimes prone to respiratory illnesses, to play outside without getting sick. The covered spaces allow everyone to participate. They are totally undefined spaces. We had already been involved in the design of educational buildings where these kinds of non-specific public spaces were created, where you can do art, gymnastics, running, etc. The presence of open spaces in the heart of the school is a way of reminding us of the essential character of public space in education.

Joaquim Moreno: To what extent are you interested in compositional forms?

Heinrich Wolff: The discourse we have is close to the subject of your exhibition, namely that the collective form has less to do with pre-existing patterns than with individuals and the way they are socially engaged. Our society today suffers from deficiencies that are due to the absence of the collective in architecture. In the school, the intra-architectural spaces reproduce the qualities of urbanity, in the spatial sense of the term, but also through the human relationships that are fostered there, especially educational ones. The question is not only to bring people together, but also to bring them together in conditions that reinforce the student’s capacity to be part of society, as well as the teacher’s capacity to ensure calm.

Joaquim Moreno: This is one of the questions the exhibition asks. Schools have closed doors. Teaching takes place in a closed room. What happens when you open the door?

Heinrich Wolff: What is interesting about the notion of “transgression” is that it is usually seen as a movement from the centre to the periphery. Here it is the opposite. From the social and neurological periphery where these children have been relegated, we try to bring them back to the centre of society. Originally, the school was to be located on the grounds of a psychiatric hospital. We spent a lot of time convincing the client to find another location.  It took us more than two and a half years to get the school built somewhere other than within the confines of the psychiatric hospital. It was finally built in an ordinary suburb of Cape Town. To achieve this degree of normality was a feat. Today you might think it was built like any other school, but the origin of the project was quite different.

The presence of an open space in the centre of the building also contributes to a calmer day-to-day management in the school. Some children can get out of control, run around, and get hurt. To ensure their safety, it is therefore necessary to have several courtyards that are separated by barriers and fences. The creation of a common, open space within the building makes these safety features less visible and less stressful for the staff who supervise the pupils. This does not mean that transgressions do not occur.

Fabrizio Gallanti: I think this idea of introducing a form of normality is very strong because it responds today to a certain demand from children, who want more structure and a more formal framework in everyday learning practices.

Post-hippie experiments with self-managed schools seem to be less appealing to teenagers; they want more serenity, more structure, and less uncertainty. This could be the beginning of a very interesting conversation.

Heinrich Wolff: You must be careful when you use terms like “normal”. These schools used to be called “special schools”. Schools for children with special educational needs. Our idea is not to make a special school, but an advanced school. In other words, what we want is for this advanced school and its functionality to correspond to what is commonly found in other educational, urban, domestic, or even professional environments. To achieve this, we must stop being ‘specialised’.

Ilze Wolff: When we received the detailed specifications for the school, one of the recommendations was that the children should not be exposed to too much light. It was specified that we should avoid contrasts in light and colour and use a subtle colour palette so as not to create hyperstimulation. Clear signage and good acoustics were also part of the recommendations. When we added up all these different elements, it became clear that what was expected was good architecture.

One of the big difficulties was the budget constraint, because the budget had originally included corridors. When we submitted our design, we were told that it was good, but not feasible. We were asked why, and we were told that we wouldn’t have the funds to build these huge ‘A’ frames instead of the corridors that had been planned.

The design and budget we were given at the outset was for a type of building that did not allow for shared space. Our challenge was to create a functional shared space. To do this, we had to simplify the classrooms to the extreme in material and financial terms in order to create a type of educational space that we felt made more sense than the one the budget was allocated for. It is a colossal exercise and a transgression at the same time. Classrooms are very simple and basic spaces. We decided to put the windows on one side only. This was part of our strategy to transgress the cost limits. We took the space allocated for the corridors between the classrooms and switched, because we had to prioritise what was most important from an architectural point of view. If you look at all the models, what we did every time we redesigned the section was to remove elements to stay within the budget.

We were very inspired by Top Gear, the TV show about car tuning. In one of the shows, there is a race where a van manages to beat a race car because all the parts that were not useful had been removed. We did the same thing. The first models have many more elements than in the final model. Before we did this pruning, we were 20% over budget. So we removed 20% of the elements to bring the project in line with the budget.  They said it would never work. Well, in the end, it did.

Discover all arc en rêve papers by clicking on this link. 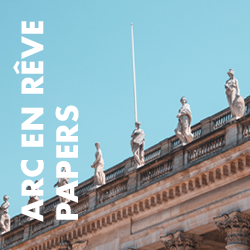