Jean Nouvel : “I have envisioned the antithesis of São Paulo’s towers.”

Bring the city back to life through culture, nature, tourism and retail, without overlook the urban and social integration, all by promising a transfer of skills never seen before; these are the ambitions of the Cidade Matarazzo, a real estate project which will rise on a 5 acres site in the heart of São Paulo by 2020. The high rise which Jean Nouvel is designing for Cidade Matarazzo is a contextual response to the site’s luxuriant vegetation, rather than its surrounding nondescript tower blocks. Currently at half its final height of 93 metres, the construction both emphasizes and furthers the spirit of the place.

L’Architecture d’Aujourd’hui: Could you tell us about how the story between you and Matarazzo started?
Jean Nouvel: First and foremost, it’s the story of a friendship with Alexandre Allard. I had worked on a house project in Switzerland for him. Together, we had also put forward a proposal for the restoration and re-development of the Hôtel de la Marine, Place de la Concorde in Paris. Shortly after purchasing the Matarazzo maternity ward in São Paulo, Alexandre contacted me to develop an ambitious new project. He wanted to create, within that space, a high rise including a luxury hotel and apartments.

AA: How did you approach the São Paulo context of the site, and in particular, the fairly ordinary-looking towers?
JN: What struck me first was precisely the surrounding tower blocks; they have nothing in common with the maternity ward. Moreover, these tall buildings aren’t characteristic of any particular city. All I can see is the automatic reproduction of an international mode, mindlessly airdropped without any sense of place. I wanted nothing to do with these towers. As you draw near Matarazzo, and upon entering, what strikes you is the microclimate that dominates the place. Tall trees create a sheltered space that is particularly inspiring. So I decided to further the spirit of the place, the soul of this small paradise made out of tall trees. To do this I needed to find a coherence and a human dimension. In other words, it seemed important to me to play down the presence of the neighbouring towers, which is how I came to envision their antithesis. In my view, it was all about a unique prototype and a gentle architecture. That’s why, among other reasons, I chose to use wood.

AA: Through this project Alexandre Allard wishes to emphasize local know-how. How did you interpret this ambition within your project?
JN: Within the context of this building, we wanted to work with wood but also with concrete –Brazilian concrete. We decided the concrete should be coloured and chose dark grey – concrete isn’t automatically grey, it’s cement that determines its shade. This choice was intended as an answer to certain climatic conditions and colours, not as an expression of Brazilian modernity. Even as I sought characteristics of openness and framing, and even if I like the work of Oscar Niemeyer, this project doesn’t try to be a tribute to that modernity. This tower couldn’t be, in its structuring, a building of the sixties… From here, looking at it, I can unequivocally tell that I am somewhere.

AA: Which shape did you envision for this tower?
JN: In terms of volumetry, the tower first develops a base at garden level. As it rises floor by floor, I envisioned a pyramidal shape; a proposition allowing the creation of numerous tree-lined terraces. Besides, I’m against buildings – even more so, tower blocks – whose four façades are identically reproduced. The high rise’s most open façade looks onto the park. It has deep and wide tree-lined terraces. On the city side, the tower looks much more abrupt, creating a dialogue with the surrounding tower blocks. This relationship is marked by the use of coloured concrete. The East and West sides are more balanced, with loggias opening out along the whole length of the building. They are shaded by wooden awnings whose varied grids intersect. This superimposition creates a particularly rich interplay of shade, which falls in with the identity of the place and echoes the half-light of the park.

This interview by Jean-Philippe Hugron was originally published in AA projects “Cidade Matarazzo, urban recycling” released in March 2019 and available on our online store. 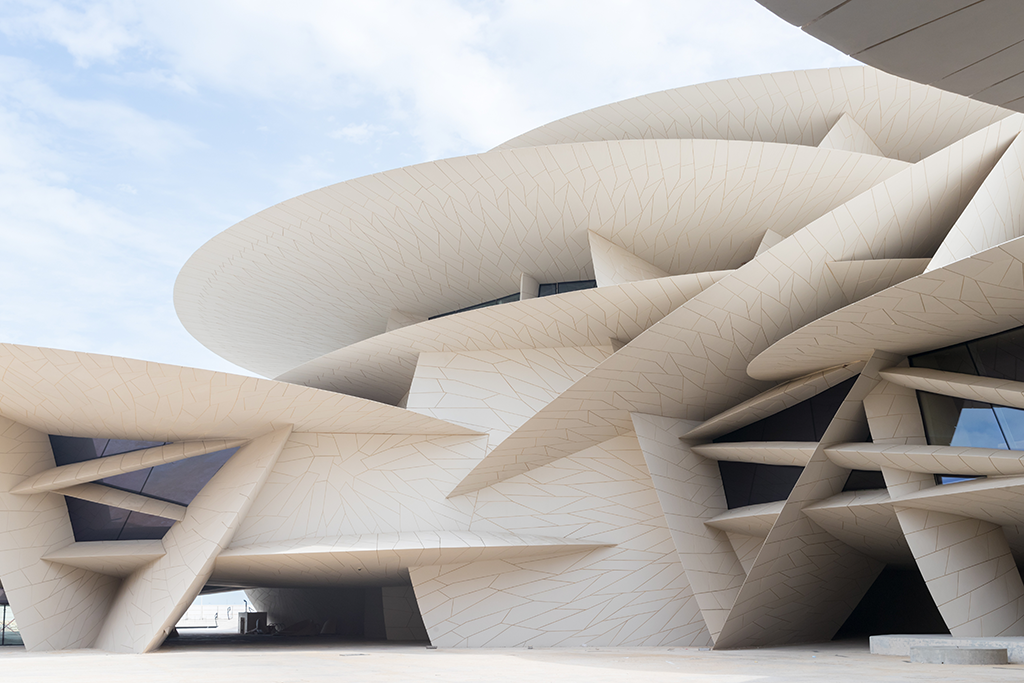 The National Museum of Qatar, designed by Ateliers Jean Nouvel, opens its doors on March 28th.

A mirage shimmers in the desert air and then vanishes. But Jean Nouvel’s National Museum of ...More about