We took the commission in 2007 when a friend reached out to us: “I have a project for you, but it’s going to be difficult, long-drawn-out and exhausting… An impossible challenge… Anyone else would turn it down immediately!” In an instant, Bruno Fléchet and I were sold.

To this day, I’m still unclear whether it was the mistake or the opportunity of a lifetime. We made a first draft, which was met with laughter by the City Hall staff: “Your architects really know nothing about ‘Bande E’ and ‘Bande Z’ buffer rules, or regulatory building profiles along property boundaries…”

A year later, this friend ended up in charge of the project. The direct commission turned into a competitive bidding process. Unavoidable, because this instance of private-market favouritism had become the subject of much talk within the community. We won the contract regardless. Then nothing.
After a year of silence, someone new was put in charge of the project and we were ready to meet the Great Sachem, hoping to finally get things started again.“Hi, we need to file the building permit within the next month, or we’ll lose the land that the city is giving us.”
The potential project was on again, and we only had 30 days to work out all of its complexities! It was August 1st. On September 1st, after forfeiting our summer
break, the project was on the table.

The tone was set. The project would be a string of twists and turns. It was a Bach piece. The score would invariably change with every party our client went to, every friend he talked to, every woman he met, every rain episode or other random event.

And there were quite a few in 14 years’s time.
Technical studies had to be redone three times. The building permit took a lot of pushing and pulling, too. After eight unsuccessful bidding competitions involving the best contractors on the market, the three macro-lots were eventually split and the work distributed among 20 contractors and their 20 subcontractors. Inexplicably, contaminants were found in the soil. Construction started with precast walls, which could no longer be delivered when the building pushed above ground level, and luckily enough could go on with site-cast concrete. As we reached the first floor, the same hilarious supplier suddenly realised that they did not know how to build the main part, the synagogue.

So with construction underway, we changed the design in just three weeks, sparing the time to set out contractual specifications or launch a new bidding competition. With a high-five and a round of heartfelt handshakes, the deal was sealed.
Next, it was financial problems. With apparently no money to spare, the bank refused to issue a payment guarantee certificate
for eights months, effectively stopping construction when structural works were almost complete. After that, it was our
electrical contractor that went bankrupt, resulting in another three months of halted works.

Then came the vicissitudes of “womanhood”… When regular glass turned into stained glass in the lovely eyes of a blind Eve.
A pattern? Absolutely! Flowers? Absolutely! An artist? Absolutely not! It took another 24 months of hesitation to make the envelope weatherproof — finally —, because “if whatever women want is not in God’s plans, the Devil will come to her aid.”
In telling this story, I have kept to a minimum the account of all the bumps and bruises I suffered during the course of the project. Of course, frogs, mosquitoes, flies, warts, hail, locusts and darkness plagued us all along the way. Building for God is a test, a journey strewn with obstacles.

As an architect ill-equipped to deal with the mysteries of religious hermeneutics, I envisioned a Promethean building that would be just as fascinating. The European Center for Judaism is a daughter of Pandora, a concrete box holding the unspeakable. Nothing to be seen, everything to be discovered. The building reveals itself from inside. What makes it special is the way it can be grasped in any direction starting from its center. Though ordinarily visitors take in a building from the front, this one reads from left to right, from bottom to top, from Nadir to Zenith, from East to West…

The design establishes unusual correspondences and spatial continuities. Nothing feels like solid ground anymore! And what else could you expect from a building designed to reach up to the heavens?
Architecture is a practice entirely based on forces of attraction. That is what I wanted this building to reflect. I wanted it to be the central point of tensions revealing invisible connections. That for a moment, visitors might escape the universal gravitation, so they could face the Eternal. And float in its midst! With one foot on the clouds and their heads in the cement.
This building opens the door to the kind of imagination, poetry, and fantasy that anyone has a right to expect in the city, like on Mount Olympus. 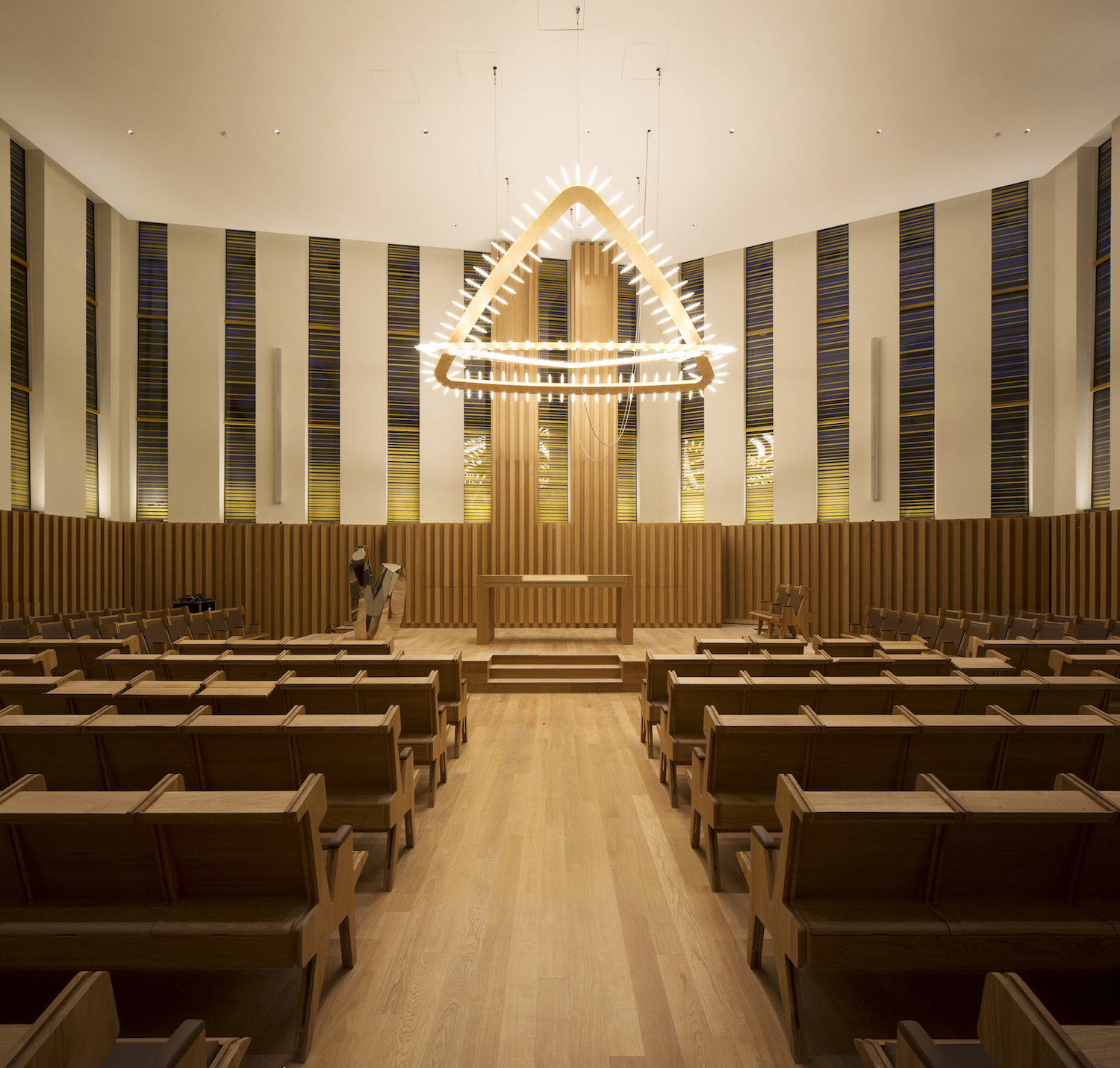 It took no less than fourteen years to raise the European Center for Judaism out of ...More about 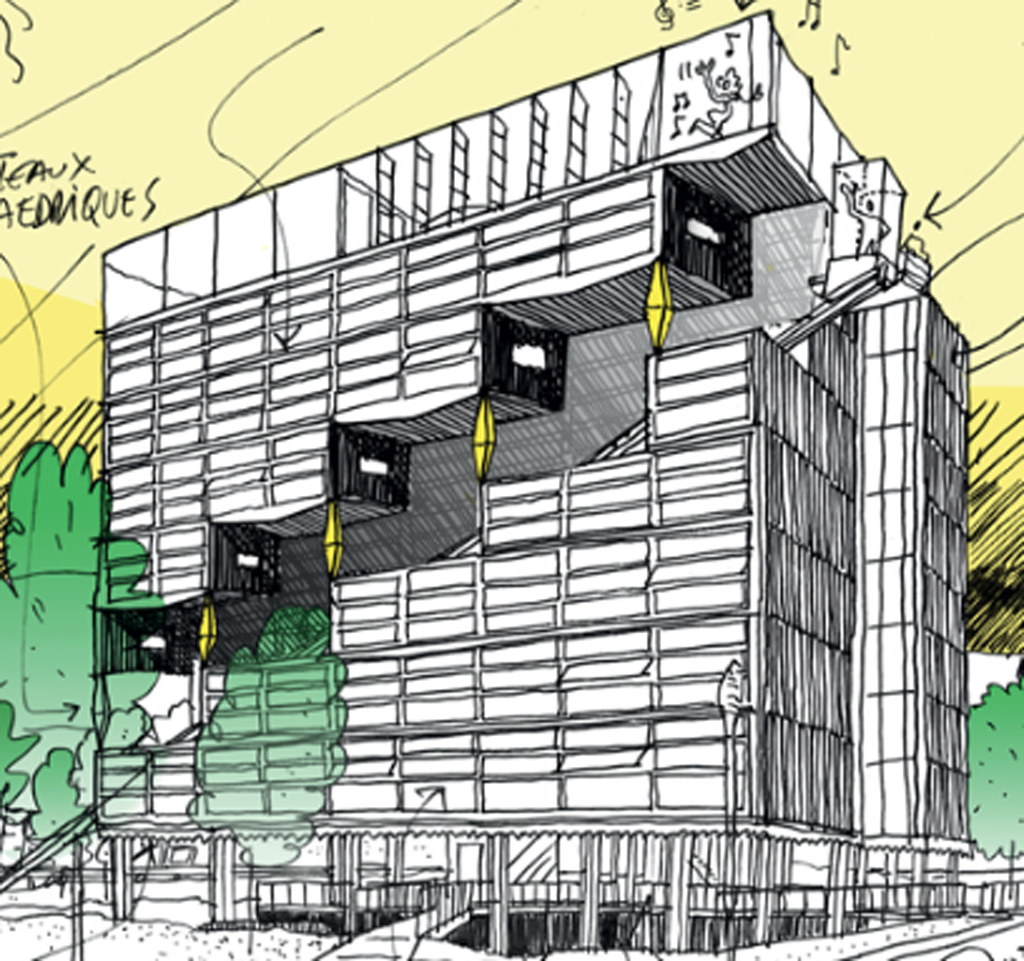 On 2 October 2018, AA held a new conversation at Atelier Tarkett in Paris as part ...More about