“We built a grey building so that the colour would come from the users,” stated the Parisian architect Aghis Pangalos referring to the Centre d’animation Ken Saro Wiwa, which he build in collaboration with the architect Anne Feldmann. The community centre’s façade, inaugurated in January 2015, has already been embellished with four different frescos changing the face of this living architecture in the 20th arrondissement of Paris.

“It is one of the very first times that graffiti artists can express themselves on the envelope of a public building with the agreement and even the encouragement of the mayor’s office!” Anne Feldmann exclaims. If the institutionalization of street art lends itself to debate, the Centre d’animation Ken Saro Wiwo nevertheless is an example of architecture offered to the intervention of artists as much as to the appropriation of its users. The Ligue de l’enseignement, which manages the centre, working with Art Azoï, a structure specialized in graffiti, regularly offers artists the possibility of using their paint and sprays on the main façade. And to not forget young amateurs, the architectures hollowed out, in their monolithic structure, a terrace whose concrete facings are planned for graffiti workshops open to schoolchildren and the district’s residents. The idea is to “recreate the urban conditions of graffiti in the city,” Anne Feldmann explains. Oriented towards graffiti, and more broadly towards urban cultures, the centre also has enormous spaces dedicated to music and the plastic arts. The entire 1,500 m2 superimposes floors that are sometimes introverted – to preserve the soundproofing of the auditorium and rehearsal studios or the dancers opposite – sometimes open on the city – with a glazed reception area extending the street or plastic arts rooms open on the neighbourhood. For Aghis Pangalos, “This architecture has a didactic role, it speaks more about the activities that it houses than about itself.” Inside, all the raw or painted concrete walls are meant to be tagged by the users, “a raw aspect that is assumed but not geared towards aesthetics,” defend the designers. And if the handful of drawings and collages that have begun to sprout on the interior walls do not always garner a unanimous opinion, Anne Feldmann asserts that “the centre now belongs to them.” 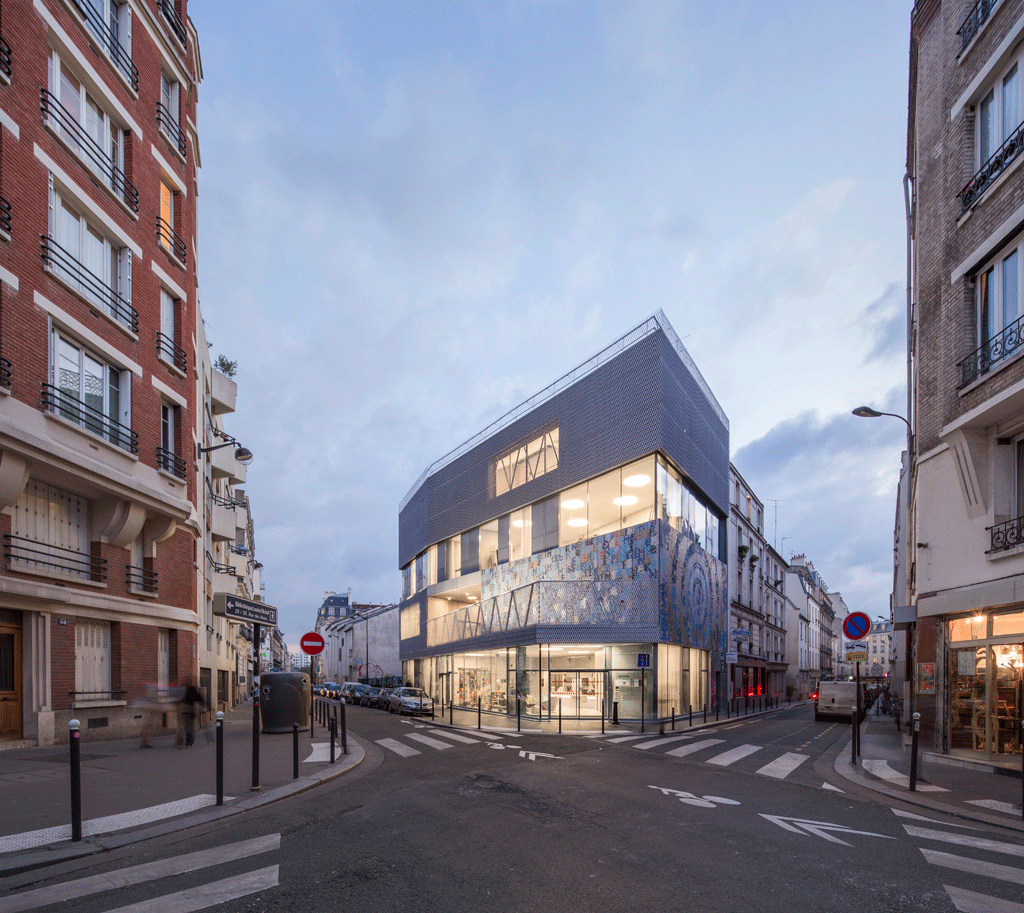 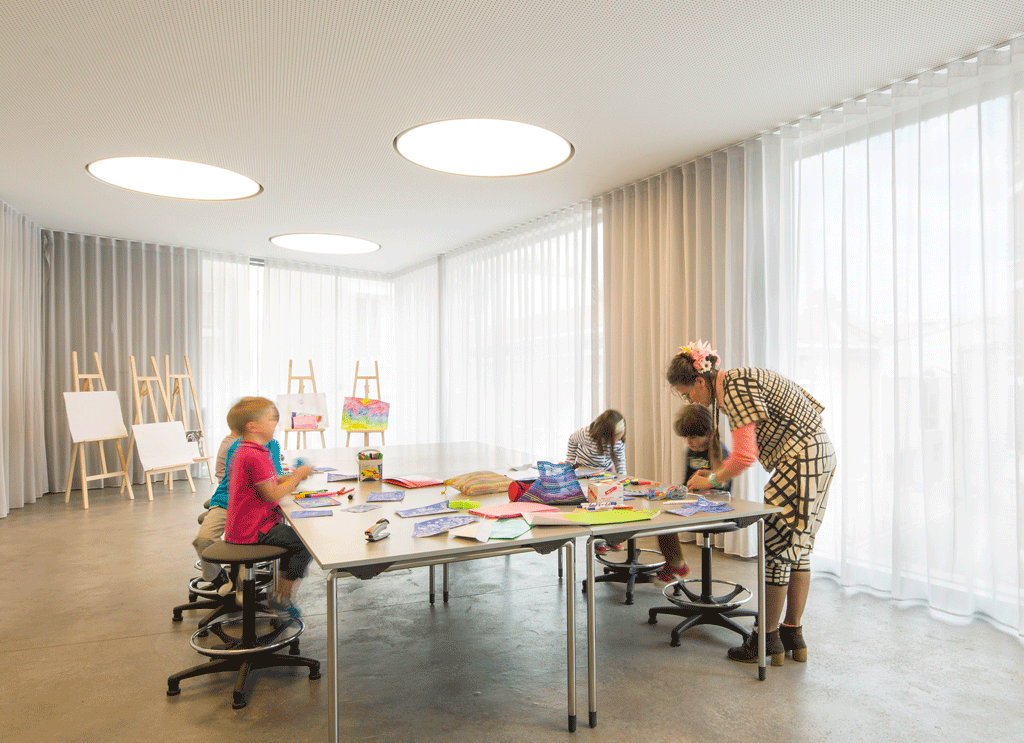 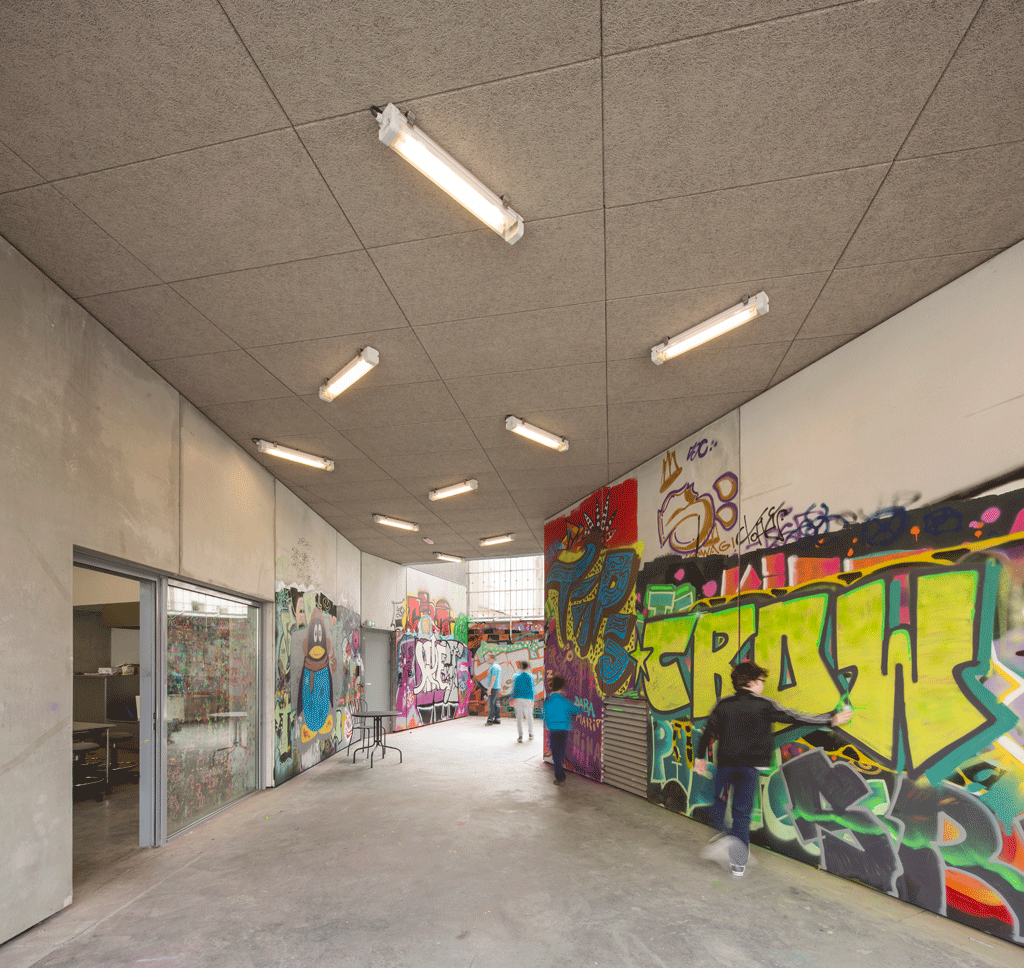